This post has been delayed as I've been away and without internet access for the last week. Part two will be published in a little while.

The final day of the Keswick Unconventional Film Club was, for me at least, the most fun of the week. Having found myself in a little Twitter debate about it a day or two ago, I was already reflecting on at least one of the directions our discussion was likely to go in. But more of that shortly. First, it's worth a comment or two on the nature of film.

Images in films can create meaning in two ways – they can be denotative or connotative. The denotative meaning is the obvious, surface level meaning. An image of a punch in a film denotes exactly what it shows, even though we know that one actor has not really hit the other. Connotative meanings arises because images can represent other things – they are symbols or signs which represent other things to us.

Connotative meanings play a very significant role in films. At its best, film is an allusive medium. That is, film tends to refer to things indirectly rather than being explicit about them. That's why an oft-quoted adage of film-making is 'show, don't tell.' Film is brilliant at hinting at things, and juxtaposing them so that the viewer can make the connection without actually saying 'look, this links with that.' When film-makers start being too explicit, viewers find it clumsy, heavy-handed and artless. 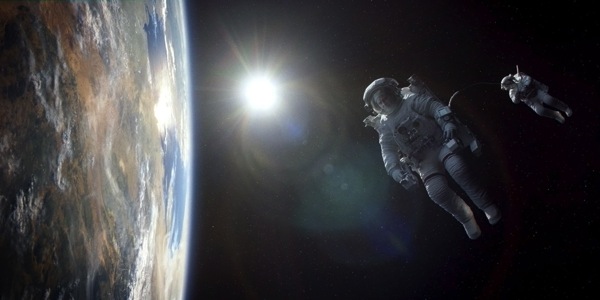 What has this to do with Gravity? Alfonso Cuarón is a director who very much works at the connotative level, rather than the merely denotative. Gravity has a number of images, shots and scenes which can be read in more than one way. This results in at least three substantially different readings of the film as a whole.

The first is to read it purely denotatively: Ryan Stone (played brilliantly by Sandra Bullock) finds the mental and emotional resources, experiencing a hallucination along the way, to overcome immense challenges and get home. Nothing in the film points beyond itself to a deeper level of meaning. Cuarón, and his son Jonas who co-wrote the film, have said enough in interviews to make clear that they intend it to be understood at a metaphorical level. In particular, Cuarón has said that outer space is a metaphor for inner space. That doesn't mean you must read it in that way, though.

The second main way of reading Gravity is to see it as a story of the triumph of the human spirit and a statement of the indomitable will of the species to survive. This reading is a step beyond the denotative reading of the film as a whole, but still reads many of the images in that way. The two explicitly religious images – the icon of St Christopher in the Soyuz capsule and the Buddha figure in the Shenzhou capsule – are simply objects that happen to be there because of the particular cultural backgrounds of the Russian and Chinese crews. They mean nothing more than the Marvin figure in the shuttle or the table tennis bat in the Tiangong.

On this reading, when Ryan despairs of life in the Soyuz and laments that nobody taught her how to pray, it is an expression of the futility of religion. The surprising appearance of Matt Kowalski (George Clooney) is a figment of her imagination. As she subconsciously reflects on his words to her, she is able to figure out a solution to her problem and is re-energised by the hope which that gives her.

The end of the film is then sees as Darwinian symbolism: as Ryan escapes from the submerged capsule, the frog reminds us of the evolutionary process. She collapses onto the land, then crawls on all fours before standing on her two feet: a triumphant human.

The third main reading of Gravity will need to wait for a second post. 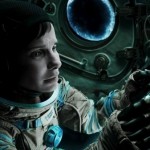 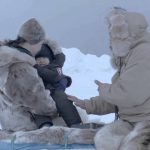 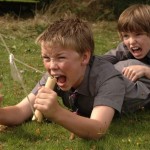 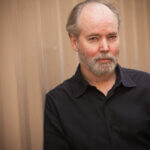