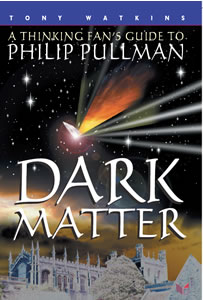 Philip Pullman's His Dark Materials trilogy is rightly acclaimed as a modern classic. Pullman creates alternative worlds that fascinate and delight, and has built up a loyal army of readers. He has been described as the 'most significant', but also the 'most dangerous' author in Britain. Who is Philip Pullman, and why have his books provoked such a wide variety of strong opinions?

Tony Watkins explains what makes His Dark Materials such a magnificent work of fiction. He explores the
influences that shaped Pullman's writing and the major themes of the trilogy, including daemons, Dust and Pullman's perspective on God.

I have some copies of the book available. Donate whatever you like towards my work (but please cover postage costs) via Paypal – just click the yellow button below. Please make sure you tick the box to share your mailing address with me – otherwise I can't send you the book! (Or you can buy from our Amazon store if you like!)

Part One: The Storyteller

1. The once upon a time business
2. Philip Pullman: places and people
3. Storytelling and other stories
4. His raw materials

Part Two: The World(s) of His Dark Materials

9. Dæmons and growing up
10. Dust, sin and the Fall
11. Consciousness, wisdom and the second Fall
12. Truth, integrity and the alethiometer
13. The Magisterium and the Authority
14. The republic of heaven
15. Once upon a time lasts for ever

Appendix: The science of His Dark Materials

Philip Pullman’s acclaimed His Dark Materials trilogy, a sweeping retelling of Milton’s Paradise Lost and the biblical Fall, has caused great controversy among Christian readers. Watkins, a self-proclaimed Christian and managing editor for the Damaris Trust’s CultureWatch Web site, offers a perspective on Pullman’s work that is anything but dark and is sure to enlighten the debate among Christians. The book is divided into three parts, the first a walk through Pullman’s life and background and the second an overview of the major dimensions of each book in the trilogy. It is not until the third section that readers will find what they are really looking for: a critical evaluation of major themes and story dimensions such as dæmons, sin, and the infamous “death of God”—an assessment that is smart and wisely restrained. Watkins’s critical appreciation of Pullman’s trilogy will surely appeal to a Christian audience, but will reach well beyond this market to a general readership looking for a solid, substantially sourced, and well-written analysis of this beloved work of literature.
Publishers Weekly, 15 March 2006

This is indeed a thinking fan's guide! Tony Watkins delves sympathetically and seriously into Pullman's fiction. He provides a readable and fun way into the theological and philosophical questions, while showing integrity towards the stories themselves.
David Wilkinson, Principal, St John's College, Durham, and author of The Power of the Force: The Spirituality of the "Star Wars" Films and God, Time and Stephen Hawking

As more of these guides to His Dark Materials are published, its good to see that they're covering more and more material. Dark Matter by Tony Watkins (published by Damaris) is the first of the books to really go in depth into the more controversial issues raised by His Dark Materials. He looks at the series from the perspective of a Christian who deeply enjoyed His Dark Materials, and is willing to tackle some of the questions that Pullman raises. While some of the earlier guide books have presented just the facts about the books, just going through and reciting the storyline without adding much commentary, Watkins has provided some excellent analysis that will be insightful to new readers and long-time fans alike. There are extensive footnotes throughout the text that are useful in following up on some of the information and quotes he uses, as well as an appendix on the science in the trilogy . . . Some readers might have expected Watkins to condemn parts of the trilogy because of his Christianity, but he is successful in portraying both his enjoyment of the story as a whole and his respectful disagreement on a few issues which are all handled tactfully.
BridgeToTheStars.net review (leading His Dark Materials fansite)

As described on the back cover of Dark Matter, Tony Watkins is a "speaker, trainer, and workshop leader for the Damaris Trust," a Britishbased Christian interdenominational "organization that helps people relate contemporary culture and Christian faith." Dark Matter is an original, book-length treatment of His Dark Materials. American readers who are accustomed to a certain belligerent and hectoring tone from any interpretive work that identifies itself as "Christian" will find Watkins' candor, cosmopolitanism, and generosity to be inviting and appealing. Perhaps tellingly, Damaris describes itself on its Website (damaris.org) as "a centered rather than a bounded organisation." Watkins begins by confessing to the reader in his preface that "I am not presenting this book as the definitive way to read Pullman's work so I don't expect you to agree with everything" (8).

Dark Matter contains fifteen chapters divided into three sections-"The Storyteller," "The World(s) of His Dark Materials," and "Shedding Light on Dark Matter." An appendix on the science of the trilogy and extensive bibliographic notes conclude the book. Although an index would be a valuable addition to this book [Note: there is one in the UK edition], Dark Matter provides its readers-general, student, scholarly-with a helpful, appreciative, and well-informed discussion of Pullman's complex work, its sources, and the public and academic reactions it has engendered. Like Frost, Watkins has benefited from interviews and conversations with Pullman himself, and he succeeds in answering the question he poses at the beginning of his book-"Why does Pullman's work excite people to such strong feelings?" (13) On the whole, Watkins achieves his goal of providing informed and insightful literary interpretation as well as a Christian perspective on the trilogy.
From Douglas Haneline. “The Elements of His Dark Materials: A Guide to Philip Pullman’s Trilogy, and: His Dark Materials Illuminated: Critical Essays on Philip Pullman’s Trilogy, and: Shedding Light on Philip Pullman’s Trilogy His Dark Materials.” The Lion and the Unicorn 31.3 (2007): 285-289.

Articles and resources by Tony Watkins

Resources on His Dark Materials by Tony Watkins. For much more depth on these issues and more, see my book, Dark Matter: A Thinking Fan's Guide to Philip Pullman.

Click here for articles on Pullman by others writers

Resources on Pullman's other books

Articles and resources by others

These links are to articles about Philip Pullman written by others. Many of the links are now dead as this list dates from about 2004. However, I'm leaving the links here as you may be able to find the articles via the Internet Archive.

General sites about Pullman and His Dark Materials

Bridge to the Stars - leading fansite

Philip Pullman in his own words: interviews and articles he's written

'Identity Crisis' - on the religious hatred bill, first published in The Guardian, 19 November 2005

Reviews, critiques and other articles

Beliefnet blogs about Philip Pullman, including contributions by myself, Donna Freitas, author of Killingthe Imposter God and others

'Craig claims Golden Compass is not anti-Catholic', The Guardian, 28 November 2007

Maev Kennedy, 'He is one of the greatest storytellers of all time, and he's here among us, writing now. It's just thrilling to be around', The Guardian, 30 November 2007

Melanie McDonagh, 'What all directors pray for', The Times, 28 November 2007