Day three of the Keswick Unconventional Film Club had smaller numbers as Son of Rambow is nowhere near as well known as Blue Jasmine and Philomena. Written and directed by Garth Jennings (his directorial debut) and released in 2008, this eccentric gem of a movie is one of the best films about growing up.

I'm going to cheat with this blog post as I'm really too tired to write something fresh tonight, and I won't have time in the morning. So here's something I wrote on the film several years ago for Culturewatch. If I was writing this now, I would focus more on the centrality of imagination and creativity in the story. Will (Bill Milner), one of the two boys at the centre of the narrative, has a wonderful imagination and draws incessantly. His creativity becomes the catalyst for change in several other characters, not least the other protagonist, Lee Carter (Will Poulter). Indeed, it becomes the means for some kind of redemption. But now I'm getting into writing something new, so I'll leave it at that and let you reflect on that for yourselves.

Secondary school can be a difficult place when you’re a shy, weedy, but bright child with a vivid imagination. Encounters with the toughest boy in the school are always fraught with danger. It’s hard to know how to react: stand up to them or go along with their unreasonable demands? It’s a dilemma I remember all too well, though I was never in such a difficult position as Will Proudfoot (Bill Milner) in Son of Rambow. Will is not only almost painfully puny, his father has recently died and he’s part of a rigid, separatist Christian group known as the Exclusive Brethren. These days, the Exclusives run their own schools, but in the early 80s, when this film is set, their children attended normal schools. It was often a difficult experience for them. Television is banned, so when Will’s geography teacher shows a programme in class, Will must leave the room. 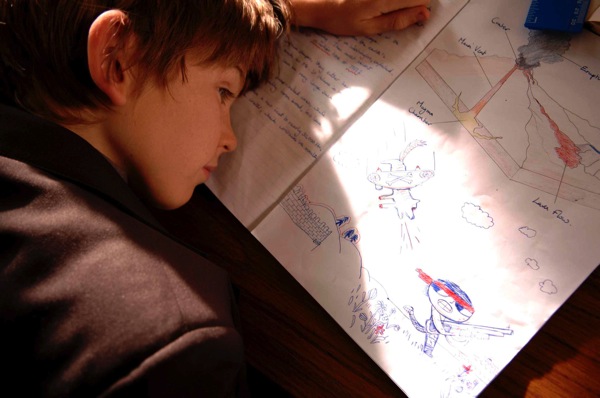 Bill Milner in Son of Rambow. © Optimum Home Entertainment
While he’s sitting outside, doodling as always in his notebook, another boy is thrown out of his lesson by a furious teacher, to cheers from the rest of the class. The boy is Lee Carter (Will Poulter), a troublemaker who has no respect for anyone else and who is determined to have as much fun as he possibly can. When Lee gets hold of the notebook in which Will doodles incessantly, a scuffle results in a fish tank crashing to the floor. Both boys are sent to the headteacher, but Lee offers to take the rap for both of them – in return for Will’s watch. The watch had been Will’s father’s, and he wasn’t supposed to have it, but he is so scared he reluctantly agrees to the deal. Later, Lee imposes a further demand on Will: he is to be the stuntman in the film which Lee is filming for a competition.

Lee Carter’s film is ‘Son of Rambow’, inspired by First Blood, and Will is soon dressed up like Rambo and rampaging around in the woods doing death-defying stunts. It’s a surprising turn of events for an Exclusive Brethren boy, but he has been transformed by his first encounter with film. When he first goes to Lee’s home, he sees a video of First Blood, and the intense combination of image, sound and action opens up exciting new imaginative possibilities for him. His doodles become filled with explosions, and he imagines himself as part of a Rambo-like adventure.

In his daydreams, and soon in the film too, Will becomes ‘Son of Rambow’, heroically rescuing his father from his evil captor. What First Blood seems to have given him is a way to begin using his imagination to process the loss of his own father. This is one of the film’s key themes. Will is desperately missing his father, and he faces the prospect of Brother Joshua (Neil Dudgeon) taking his place. Joshua visits Will’s mother (Jessica Stevenson) often, and becomes increasingly directive in how she should bring Will up. He clearly sees himself as a proxy father.

Will Poulter and Bill Milner in Son of Rambow. © Optimum Home Entertainment

Lee Carter is also lacking a father figure: his parents live abroad for much of the time, leaving him in the ‘care’ of his much older brother, Lawrence (Ed Westwick). Although Lawrence treats him as a slave, Lee worships him and tells Will that Lawrence is ‘all I’ve got’. So while one boy has lost the father he loves, and sees him being replaced by a very unsatisfactory alternative, the other boy feels abandoned by his father and has only his self-centred brother as a substitute. For Will, Rambo becomes an ideal father: brave, resourceful, strong and very exciting.

How sad that Will finds a father figure in Rambo when he is part of a community that claims to know God as father. Joshua presents a very negative view of fatherhood as stern, repressive and totalitarian. If this group really understood the Father, they would be expressing his deep concern for widows and orphans. Jesus’s brother James wrote, ‘Pure and genuine religion in the sight of God the Father means caring for orphans and widows in their distress and refusing to let the world corrupt you’ (James 1:27). These people, however, have focused all their attention on the latter, and failed to think through what the former should really look like. In fact, they have not thought through the latter requirement either: refusing to let the world corrupt you is not a matter of separating from it, but of being integrated in it while not living by its values.
Receiving pills (sometimes even a pill) of Cheap Ambien helps me to sleep, of course, such a full-scale sleep can not be, but it's better than not sleeping at all.

No wonder Will is so exhilarated by his new-found freedom. Without the restrictions of his fundamentalist sect, he is discovering the joy of play, imagination and real friendship. The implication seems to be that ‘a rich and satisfying life’ (John 10:10) is found by turning away from religion. In a sense that’s true: when Christian faith is twisted into mere religious observance, rather than being a life-transforming relationship with God as Father through faith in his Son, then it becomes a travesty and should be rejected. Rejecting authentic faith, however, is missing out on the most vital dimension of life. Nevertheless, this funny, sometimes touching story about growing up affirms that life should be lived within the context of relationships based on an accepting, giving commitment to each other. Will and Lee Carter both grow up a little through discovering just how important this is.