This article was first published on Culturewatch, republished by permission.
©Tony Watkins, 2009

In common with so many established film franchises these days, Star Trek takes us back to the beginnings of the characters with whom we’ve become very familiar. But unlike the majority of them, this is a brilliant success (notwithstanding some problematic plot devices): it’s exciting, fresh and up to date, but is also faithful to its forty-plus year heritage. The main characters are almost all instantly recognisable, even though director J.J. Abrams insisted that the actors should not simply attempt to imitate their predecessors who defined the roles. The main characters are not just recognisable, they’re as compelling as the originals, setting this crew up well for sequels. Also in contrast to most ‘origins’ films, the story of how the crew of the USS Enterprise came together, and what made them such a great team, is actually an interesting story. Given the number of Star Trek stories there have been over the years, it is surprising that no one has explored this before. Producer Damian Lindelof says, ‘For me, the idea that no one has ever told an origin story for Kirk and Spock and all these characters was very cool. We had a great conversation about how this crew of people might have come together and learned to sacrifice certain parts of their personalities to get along.’

The story opens with the USS Kelvin being attacked by a massive Romulan ship, the Narada. When Captain Robau (Faran Tahir) is summoned onto the Narada, he leaves George Kirk (Chris Hemsworth) in charge. Captain Nero (Eric Bana) of the Narada wants one piece of information: the whereabouts of Ambassador Spock – a question which shows that the Romulans have come from the future somehow. Back aboard the Kelvin, when Kirk realises that Nero has killed Robau, he orders an evacuation of the ship, including his wife Winona (Jennifer Morrison) who is going into labour. Kirk stays at his post to hold off the Narada while the shuttles escape. In his last moments, he keeps radio contact with Winona while she gives birth to a son, whom they name James Tiberius. It’s a moving start to the film, exemplifying Abrams’s distinctive ability to combine high action with intense emotion.

We move forward several years to see James T. Kirk as an adolescent getting into trouble with the police, and later as a hot-headed young man (Chris Pines) trying to chat up an attractive Starfleet cadet, Uhura (Zoë Saldana), and getting into a bar brawl with some of her male companions. J.J. Abrams remarks, ‘We had the idea that Kirk would be almost a rebel without a cause when we first meet him. He’s a renegade, a nonconformist, a go-by-the-gut kind of guy, but he’s basically lost.’

The fight is broken up by the arrival of Captain Pike (Bruce Greenwood) who is thrilled to discover who the young man is, since Pike had written his dissertation on Kirk’s father and his heroism. He sees Kirk’s potential and encourages him to join Starfleet. As Pike makes to leave, he challenges Kirk: ‘Your father was captain of a starship for twelve minutes. He saved 800 lives, including your mother’s – and yours. I dare you to do better.’ Bruce Greenwood comments, ‘I’ve always liked father-son stories and there’s something of that in Pike and Kirk. Every son wants to avoid his father’s mistakes and when Pike comes to Kirk and says “I dare you to do better,” that is the one thing that gets to him. As for Pike, he sees something remarkable in Kirk and is willing to take a chance on him, even though Kirk gives him numerous opportunities to regret it.’

Meanwhile, across the galaxy, a young Spock is bullied because he is half-human. When his tormentors call his father a traitor, Spock snaps and lays into one of them. His father (Ben Cross), a member of the Vulcan Council, is disappointed at this display of raw emotion from his son. He reminds Spock that he must learn to ‘control emotions so that they don’t control you.’ The boy’s difficulty is that, with a Vulcan father and a human mother, there are two natures competing within him: the rational and the instinctive. His father is aware of this and suggests that the boy must choose between them: ‘Spock, you will always be a child of two worlds, and fully capable of determining your own destiny. The question you face is, which path will you choose? This is something only you can decide.’ Alex Kurtzman comments, ‘It was really fascinating to think about young Spock, who is literally torn between the Vulcan and human world and, like any child, is trying to figure out where he fits in.’

A few years later, and the Council approve Spock’s (Zachary Quinto) admission to the Vulcan Science Academy. But a comment about him overcoming the disadvantage of a human mother prompts him to scandalise the council by turning the offer down in favour of going to Earth to join Starfleet Academy. Abrams says, ‘Spock has to decide if he should control his emotions or embrace his humanity, and struggles with the duality of who he is throughout the story. I loved the idea of this character trying to figure out his place in the world.’

The problem for many Trek fans will be that this film doesn’t do what earlier incarnations did: it does not deal with some significant social, ethical or political issue, which was always Gene Roddenberry’s intention. Gary Robinson writes, ‘Trek was never so much about adventuring in outer space as it was exploring the space between our ears – and the space between each other. It was about ideas. It was also about relationships.’ The focus here is very much on the relationships among the Enterprise crew, especially that between Kirk and Spock. It is true that this was a key factor in all the original series, and that it didn’t preclude dealing with big issues, but here the focus is deliberately on what defined these two characters, and how their friendship came to be so significant. The crisis presented by the vengeful, genocidal mission of the Romulans is never properly explored; it really just provides the framework in which to work the story out. It’s a way of bringing the new crew together and getting them on board the brand new Enterprise at (mostly) the same time. And it provides the challenge to which Kirk and Spock must rise in their different ways, so foregrounding the tension between them.

Kirk is a classic American hero: a tough, brilliant maverick who fights for freedom and justice in nonconformist ways. In the original Star Trek series, Kirk was a great leader of a talented, committed but diverse team; his individualism was present, but balanced with his skills as a team player. The emotional side of the core trio of Kirk, Spock and McCoy was mostly expressed by the doctor, in even sharper contrast with Spock than Kirk. But this film shows us Kirk as a much more individualistic and anti-authoritarian young man, a hot-head who lets his emotions drive him and who clashes repeatedly with systems, procedures and pure logic.

In sharp contrast, we are familiar with Spock as the embodiment of cold rationality and the antithesis of fiery emotion. There have been times in earlier stories when his emotions have surfaced, but he has always quickly submerged them again. Here we see his early struggles to deal with the tension which is within him, and his growing mastery over his emotions. Zachary Quinto says, ‘Spock was always fascinating to me because of the conflict between his mind and his emotions and by his ability to maintain equanimity no matter what is going on around him. In this new version, you get to see him figuring out how to find the balance that will allow him to achieve greatness.’

The clash between Kirk and Spock is inevitable: they are both strong, obstinate characters who believe that they are absolutely right and the other absolutely wrong. It is perhaps intensified in that each of them sees in the other not only their opposite, but also something which they recognise within themselves. Kirk has been ruled by his heart rather than his head, but he is a brilliant student at Starfleet and he must know that he needs to overcome his ‘instinct to leap before looking’. Spock sees in Kirk the impetuousness of being emotionally driven that he fears within himself. They both see the other’s attitudes as a fundamental weakness. Kirk is too ready to break the rules; Spock is too ready to keep them. Roberto Orci explains that, ‘we felt very strongly that they both had to have a point.  We didn’t want either one to be right at the expense of the other.  Kirk and Spock are truly facing a moral dilemma but come to realize that only by finding a way to work together can they actually move forward.’

Eventually, of course, they come to value each other, respecting their respective strengths and compensating for each other’s weaknesses. The turning point for Kirk is an encounter with a much older Spock (Leonard Nimoy) who has come back through time (their meeting is either evidence of a higher power at work in the Star Trek universe or a ridiculous coincidence, but it’s worth it to have the original Spock appear). His immense warmth towards Kirk surprises the young man, but he sees a human side to Spock for the first time, and understands how to circumvent the procedure-bound decisions of the younger Spock. For his part, the Vulcan comes to realise that he is ‘as conflicted as when [he] was a child,’ and when his father advises him not to try to keep his anger under control, he comes to understand that both logic and emotions are vital. Nero, who as a Romulan has a common ancestry with Spock, serves as a counterpoint to the Vulcan in a different way: he shows the result of allowing unchecked anger to overwhelm a person.

The need to combine head and heart is not the most profound issue for the film to deal with (and it is disappointing that the question of genocide was not really explored in any depth). But it is an important aspect of human nature. We are weakest when we work with just one or other side to our personalities, since God made us with both. We are at our best when the two work in creative tension, whether within us or, preferably, in partnership with others. While the partnership of Kirk and Spock is clearly central, the team as a whole is vital. Kirk the individualist learns to be a team player and to combine the various strengths and abilities into a cohesive whole. Spock the rationalist learns that reason is not the right response – or the sole response, at least – in every situation, and he learns the humility to serve under a great leader. Combine this with their shared commitment to justice, truth and freedom, and they make a fantastic team. May they live long and prosper!

An Island of Misfit Toys – Moneyball 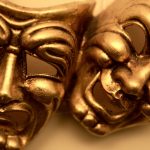 Art’s Desire: Responding to Film and Literature (part three)
© Tony Watkins, 2020
The Tony and Jane Watkins Trust oversees and supports the ministries of Tony and Jane Watkins in Christian training, education, and communication. It is a charity registered in England and Wales, no. 1062254.
Privacy policy