An article by Tony Watkins on Angels and Demons, directed by Ron Howard and based on the novel by Dan Brown.

This article was first published on Culturewatch. © Tony Watkins, 2009 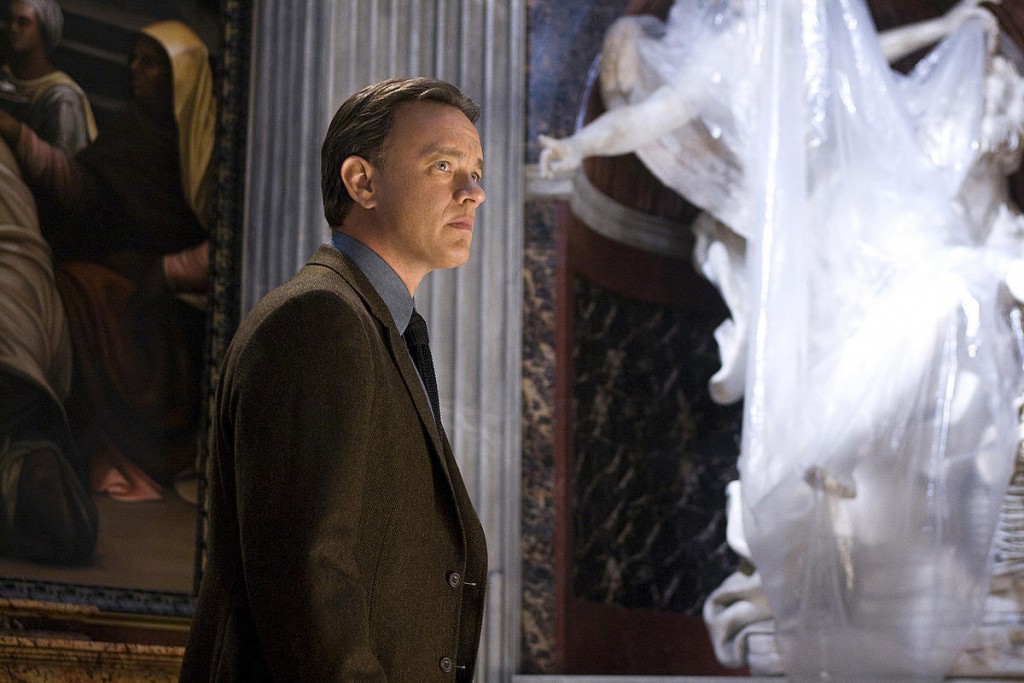 Harvard symbologist Professor Robert Langdon (Tom Hanks) is back in action deciphering ancient codes as he races around cathedrals, crypts and catacombs, as well as the world’s most secretive vault. After his success with cracking the ‘Da Vinci Code’ and rescuing the Priory of Sion from having its great secret exposed, he was not exactly popular with the Catholic Church. However, his reputation is such that the Vatican sends one of its police officers to ask for his help when it is sent a curious symbol: an ambigram of the word ‘Illuminati’ which looks identical when it turned the other way up. Langdon is astonished to see it: the secret ambigram was ‘supposed to only be revealed when the Illuminati had gathered enough power to resurface.’ The Illuminati, we discover, are old enemies of the church, scientists who objected to the Church’s persecution of them. It appears that they have risen again for a final confrontation. The Pope has recently died, and the cardinals are about to go into conclave to elect his successor. But four of them have been kidnapped and the message that came with the ambigram states that they will be killed at one-hour intervals, leading up to midnight when the Vatican will be destroyed by anti-matter which has been stolen from CERN, the particle physics laboratory underground near Geneva.

This unlikely plot was Dan Brown’s first story about Robert Langdon, Angels and Demons, which was published in 2000, three years before his runaway bestseller The Da Vinci Code. However, because director Ron Howard filmed the latter book first, he treats the film of Angels and Demons as the sequel. It matters little, since both stories stand on their own. Brown’s success comes not from the quality of his writing, but from his ability as a storyteller. He combines three key elements in his stories, which make them, compelling to many readers. First, he is very good at maintaining pace and tension through cliffhangers. This wasn’t realised very successfully in Howard’s adaptation of The Da Vinci Code, but it is a key factor in making Angels and Demons a more enjoyable film. Second, he is good at weaving puzzles, codes and mysteries into his stories. In Angels and Demons, Langdon, aided by beautiful CERN physicist Vittoria Vetra (Ayelet Zurer), must find and decode clues to the Illuminati’s ancient ‘path of illumination’ in the hope of locating the anti-matter bomb. Brown’s third important element is conspiracy theories, which provide motivation for the stories’ bad guys. Here, we have the notion of the Church’s long-established opposition to science, and the willingness of some within the Church to do whatever it takes to halt scientific progress, coupled with the idea of a secret society of scientists who have sworn revenge for the way Galileo and others were treated. Whether or not these ideas have any validity – and they have very little – they make for an entertaining confrontation and a sense that secret forces are being unveiled.

Ron Howard and his screenwriters, David Koepp and Akiva Goldsman, have significantly toned down much of the controversial material in Dan Brown’s novel (such as avoiding having a character who is the test-tube baby of the Pope and a nun), but the central theme of a clash between science and religion is still at its heart. The story Robert Langdon tells is one of persecution – a ‘brutal massacre’, in fact. When Vatican police head Ernesto Olivetti (Pierfrancesco Favino) declares that his men will hunt down and kill the Illuminati, Langdon tells him:

The Illuminati did not become violent until the seventeenth Century. Their name means 'The Enlightened Ones'. They were physicists, mathematicians, astronomers. In the 1500s they started meeting in secret, because they were concerned about the church's inaccurate teachings. They were dedicated to scientific truth. And the Vatican didn't like that. So the church began to, how did you say it? Oh, hunt them down and kill them.

Langdon refers specifically to an event he refers to as ‘La Purga’. When Swiss Guard Commander Richter (Stellan Skarsgård) doesn’t understand what Langdon means, the symbologist is frustrated. ‘Geez,’ he sighs, ‘you guys don’t even read your own history, do you? 1668: the church kidnapped four Illuminati scientists and branded each one of them on the chest with the symbol of the cross, to purge them of their sins. And they executed them, threw their bodies in the street as a warning to others to stop questioning church ruling on scientific matters. They radicalized them. The ‘Purga’ created a darker, more violent Illuminati, one bent on retribution.’

This is all complete invention on Brown’s part, but because he is so specific, many people will believe that what is stated is true. ‘La Purga’ never happened. The Illuminati were not primarily scientists, but free-thinkers who were interested in politics, not science. As in The Da Vinci Code, he claims that his story is based on solid historical fact, but in reality he bases it on pseudo-history which has no connection with hard evidence. According to Langdon, early members of the Illuminati included Copernicus, Galileo and Bernini. All of them had been dead for many years before the historical Illuminati was formed in Bavaria, rather than Rome, in 1776 (Bernini died in 1680, Galileo in 1642 and Copernicus in 1543). It has ceased to exist within twenty years. Copernicus had not been persecuted (let alone killed, which Brown claims in the novel) by the Church. He was supported by the church, dedicated his On the Revolutions of the Heavenly Spheres to Pope Paul III, and died quietly in bed after a stroke. Bernini was not a scientist and seems to have been quite content working closely with the Vatican. And the Galileo affair has been misrepresented often in popular culture, but rarely as grossly as by Dan Brown (for a well-researched, historically accurate account, see Ernan McMullin’s ‘The Galileo Affair’).

Brown repeatedly claims to have thoroughly researched the history, the science and the architecture, but his writing is so riddled with errors, baseless speculation or blatant untruth that it becomes hard to believe anything. For example, central to the plot is the possibility of producing huge amounts of energy from antimatter. But CERN states categorically on its website that the ‘Angels and Demons scenario is pure fiction.’

The lack of any solid foundation for the story is clearly no problem for Dan Brown or for Ron Howard, and it probably won’t be something that many viewers of the film will even pause to consider. Yet they will take away from it, and even more so from the book, the idea that the church has historically opposed science, and that it continues to do so at an institutional level, even if there are individuals within it who see no conflict between them. This is a serious misunderstanding, though there are areas of tension (in particular on ethical issues) and there have been times when the church has not acted as it should. What is more significant is tension between Christian faith and those who equate science with atheism, such as Richard Dawkins and other ‘New Atheists’. The fact that many reputable scientists are also committed Christians shows that this simplistic equation is not valid.

However, a positive theme, however badly Dan Brown does with it, is the need to follow the evidence to discover the truth. Within the fictional world, that is what Robert Langdon is intent on doing. It is a goal which should be shared by anyone who doesn’t want to base their thinking and values on a lie. There is strong evidence for the truth of the Christian good news which bears examination. Since the heart of Christianity is that our eternal destiny turns on how we respond to the death and resurrection of Jesus Christ, it is something that we cannot afford to dismiss without serious consideration. But it is important to note that the failings of the church, and of individual Christians is not evidence against the truth of the ideas, but rather are the inevitable consequences of fallen human nature. As Cardinal Strauss (Armin Mueller-Stahl) says to Langdon at the end of the film, ‘Religion is flawed, but only because man is flawed. All men, including this one.’ Religion is merely than the systems and practices through which people organise their worship and church structures. Of course it’s flawed. But Christian faith is about a personal relationship with God, based on the truth of what God has revealed of himself. When they first meet, Cardinal Strauss asks if Langdon believes in God. After hesitating to explain his beliefs about what he sees as the human origins of religion, Langdon says, ‘I am an academic. My mind tells me I will never understand God.’ ‘And your mind?’ presses the cardinal. ‘Tells me that I’m not meant to. Faith is a gift I am yet to receive,’ Langdon replies. Maybe Robert Langdon, the supposedly great investigator of evidence and pursuer of truth, should actually investigate the evidence for the truth of something he glibly dismisses, yet which has changed the lives of billions of people down through history.