I was struck by these comments about the loss of beauty in British life by the philosopher Roger Scruton:

In the '50s and '60s, when my generation was growing up, British people were actively recruited by the educational system and the worlds of art and religion to an aspirational culture. Those were the days of Henry Moore and Benjamin Britten, of Graham Sutherland and Michael Tippett. W. H. Auden was an important voice, as was the ex-American T. S. Eliot. Britain was a place of deep historical and religious significance. You were privileged to belong on its soil, and all around you the national history had left the signs and portents of a higher way of life. At the risk of exaggeration, it could be said that my country, in those years when the baby boom generation was advancing toward its lifelong immaturity, was an experiment in redemption. Its art, culture, and religion were devoted to the ideal of a community in which decency, puzzlement, and self-denial held sway. And there remained, as a kind of leftover from wartime propaganda, the belief in the gentleman, who faces life in a posture of self-sacrificing devotion to nonsensical ideals -- nonsensical, that is, from the point of view of the cynical observer, but not nonsensical at all, given the spirit in which they were accepted.

The American visitor to Britain today, and especially the visitor who retains a memory of that extraordinary world in which decency, self-deprecation, and the stiff upper lip were the ruling principles, often recoils in shock at what he finds. The public culture is one of appetite and satire, and the whole country seems to be "in your face," as though sticking out a collective tongue. Many American friends tell me this, and speak sorrowfully of the change from the Britain that they used to visit with a sense of coming home, to the Britain that they visit today, which is a land of strangers. The interesting thing, however, and the response to my film seems to confirm this, is that many of the British people agree with them. The British people too are in a land of strangers, and the culture that rules over them is one to which many of my countrymen cannot in their hearts belong. 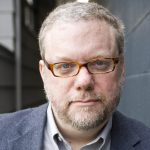