The Great Altar from Pergamum (Bergama, in modern Turkey), in the Pergamum Museum, Berlin © Tony Watkins. This photo is licensed under a Creative Commons Attribution-NonCommercial-ShareAlike 3.0 Unported License.

One of my favourite places in the world is the British Museum in London. As someone who is passionate about the Old Testament prophets, the Assyrian collection there has a particular magic for me. I'll post about it some other time, but since I'm in Berlin next week I will just post about that city's wonderful Pergamum Museum – another of my favourite places. The greatest pleasure there for me is the Ishtar Gate from Babylon, which I will cover in my next post. I'll start, though, with something which relates to the New Testament, rather than the old: the Great Altar from Pergamum. This is the museum's centrepiece and the very reason why it was built in the first place. The partially reconstructed altar is an enormously impressive structure.

Some fragments were found by the German engineer Carl Humann in 1871, re-used in a Byzantine wall in Pergamum, which prompted the Berlin Museum to start excavating seven years later. The remains of the Great Altar were discovered and shipped to Germany where part of the altar was reassembled. What we see in the museum is just the front part, as can be seen from the model below.

Pergamum is mentioned in Revelation 2:13–17. The reference to 'the throne of Satan' in v. 13 may refer to the Great Altar, which was dedicated to both Zeus and Athena.

Around the altar was a 113 m long freize, decorated with carvings of a battle between the giants and the Greek gods and goddesses. 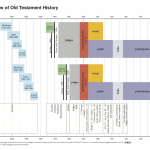