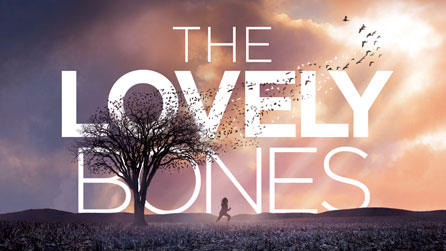 When Susie was small, she was worried for the penguin trapped inside a snow globe. ‘Don’t worry, kiddo,’ her father Jack (Mark Wahlberg) reassured her. ‘He has a nice life; he’s trapped in a perfect world.’ Several years later, Jack could do with someone offering the same reassurance to him about his daughter (Saoirse Ronan) when she is abducted, raped and murdered. This tension between perfect and imperfect worlds runs right through Peter Jackson’s The Lovely Bones, based on the best-selling novel by Alice Sebold.

The Salmon family seems to be perfect. A loving couple with two delightful daughters, living in a nice suburb; what more could they want? Jack even constructs perfect worlds through his hobby of making ships in bottles, which Susie delights to help him with. The biggest tension in the family is whether or not Susie will wear her new knitted hat to school. But the evil desires of one man wreck everything, devastating Susie’s family. Ironically, Susie’s murderer also constructs perfect worlds: he makes dolls houses with obsessive attention to detail. But he also brings the same compulsion to building places where he can lure his victims to their destruction.

Jack instinctively wants to restore the situation somehow. ‘I’m going to take care of this. I’ll make this right,’ he tells Susie’s mother, Abigail (Rachel Weisz). ‘You can’t make this right,’ she replies. Jack becomes increasingly consumed with trying to work out who is responsible, since the police fail to identify the culprit, while Abigail begins to feel that she needs to put it all behind her and move on. Jack knows he cannot bring the near-perfect life they had enjoyed back again, but he longs for justice to at least put things into the right balance. Later, when he thinks he knows the identity of his daughter’s murderer, he sets out with a baseball bat, intent on revenge. Even this proves impossible, though, and he becomes a victim of violence himself.

Although none of them realise it, Susie is trapped in what seems to be a perfect world. She says, 'I was alive, alive in my own perfect world.' She is not in heaven, as she first assumes, but in limbo, an in-between state. She is still connected to the world by her memory of it and her reluctance to let go of her father’s love. This in-between state is an extraordinary environment, where Peter Jackson uses impressive special effects to create her surreal, dream-like existence. But Susie finally admits that, ‘in my heart, I knew it wasn't perfect. My murderer still haunted me.’ Susie meets another of her murderer’s victims, Holly (Nikki SooHoo), who tells her, ‘This isn't heaven. You're not there yet. . . . You need to let go of earth. You're dead, Susie. You have to leave.’

Susie is held back by her memories. Some are lovely memories, such as the snow globe and being given a camera. ‘I love the way it captured a moment before it was gone,’ she recalls. This is what memory does, too. The film suggests that Susie and her parents are both trapped by their memories of the awful event, and that people can only begin to really live again when they begin to forget, or at least to hold less tightly to those memories. Susie reflects at one point, ‘My murderer began to feel safe. He knew that people wanted to forget, that they needed to move on. But there was one thing my murderer didn't understand. He didn't understand how much a father could love his child.’

The Lovely Bones is, of course, a deeply disturbing film because it confronts us with the desperately imperfect nature of the world we live in. It is not only a world in which terrible things can happen, but one in which justice is not always achieved. Even justice’s defective relative revenge is not always possible. It’s a world in which a young girl’s potential for joy and love and creativity can be snuffed out in a moment, yet an evil man’s desires can go unchecked. It is a desperately broken world – a perspective which is entirely consistent with that of the Bible.

The biblical account of humanity is that we enjoyed an idyllic existence at first, in perfect harmony with each other, with our environment and, most importantly, with God in whose image we were created. But we rebelled against God, exerting our free will to become autonomous from God, and seizing for ourselves the role of deciding what is right or wrong, good or evil. That rebellion twisted and corrupted the image of God within us, so that as well as being capable of great good, every one of us is now also capable of great evil. And the same urge to be utterly autonomous from God lives on in each one of us. It’s what the Bible calls sin: a fundamental bias against God and in favour of giving in to our own self-gratifying urges. The freedom to choose that we have misused so dreadfully is what has broken our world. Why didn’t God intervene to stop it? Why doesn’t he intervene now to stop evil acts? Simply because he cannot give us free will and withhold it at the same time. It is a logical impossibility and, as C.S. Lewis famously said, nonsense is nonsense even when you talk it about God. Why is our free will so important? Without it, relationships with each other and, more fundamentally, with God, would not be based on genuine love, but would be merely programmed into us. It may seem a costly price to pay, but genuine love is surely the ultimate good which we would not want to be without.

However, the Bible’s account of our world’s brokenness does not end with an explanation for why it is like this. Instead it goes on to tell the story of God’s plan to deal with our sin and rebellion. That could simply be a story of justice. Watching The Lovely Bones, we, like Jack, long for Susie’s murderer to face justice. But we forget that God can legitimately want the same for each of us. He would be perfectly just in judging us for our rebellion, our self-gratification, our abuse of others, our deception and violence (in thought if not deed), our exploitation and greed. Yet the Bible is clear that God wants us back in relationship with him. The Bible is the unfolding story of the need for justice and love, of God’s desire to eliminate sin and to show grace to sinful people. These two strands come together in the incarnation, death and resurrection of his son, Jesus Christ. This is the point in history at which God steps into our world and becomes a man. He is not remote in heaven, merely grieving over our brokenness and weeping for our pain. Instead, he came to live in our broken world, as one of us yet perfect. He came to die for us, taking on himself the judgment we deserve – an act of the most extraordinary grace. It is worth remembering that God himself has been the victim of the worst of human evil and violence, and he understands fully the pain it causes. The cross of Christ means that God’s justice is satisfied, the price has been paid for us, and – if we accept it – we can be forgiven and come into a relationship with God himself. It means that God’s kingdom breaks into our broken, imperfect world.

The limbo in which Susie finds herself is not a biblical idea, and there is no sense in The Lovely Bones of God having anything to do with it (Peter Jackson insisted on not portraying a particular religious perspective on heaven). Heaven is a place of perfection that Susie can move on to, but there is no hint that God makes is possible for her to do so. And while the film’s picture of the brokenness, senselessness and injustice of this life is accurate, there is no assurance whatsoever that God will one day establish perfect justice. But the Bible does insist that judgment is coming. We either accept Jesus bearing it on our behalf, or it falls on us. For those who do respond to Jesus’s offer, there is the promise, not of some surreal limbo world in which we are haunted by memories of this imperfect life, but of eternal life with God - an absolutely perfect world.

He Will Wipe Every Tear – Malick's 'The Tree of Life'