The Lives of Others is one of the finest films I’ve seen. Winner of the 2007 Academy Award for Best Foreign Language Film, it is all the more amazing as this is German writer/director Florian Henckel von Donnersmark’s first film. Set in East Berlin in 1984, it is the story of two men. The first is Georg Dreyman (Sebastian Koch), a playwright who is thought by the authorities to be alone among his peers in his loyalty to the Socialist Unity Party. The second, State Security (Stasi) Captain Gerd Wiesler (Ulrich Mühe), is absolutely committed to the Party and highly effective in his work. He has his doubts about Dreyman’s loyalty when he watches him at the premiere of his new play.

Wiesler’s former classmate, Anton Grubitz (Ulrich Tukur), has become head of the Stasi culture department and laughs off Wiesler’s suspicions. But Minister Bruno Hempf (Thomas Thieme) has his eye on Dreyman’s girlfriend and leading lady Christa-Maria Sieland (Martina Gedeck). It would be useful for him if Dreyman was found to be disloyal, so he suggests to Grubitz that Dreyman should be placed under surveillance. Grubitz, eager to curry favour with the Minister, immediately agrees with the wisdom of this action, and entrusts the case to Wiesler. Wiesler has Dreyman’s apartment bugged, and sets up his listening post in the loft of the building.

Ulrich Mühe in The Lives of Others (Das Leben der Anderen)
Image © Lionsgate, 2007

By focusing attention on this one operation, Donnersmark examines the mechanisms of the entire German Democratic Republic. A title card at the beginning of the film informs us that the Stasi had nearly 100,000 employees at this point in history, and a further 200,000 informers. The goal was ‘to know everything’. The ruthlessness with which this goal is pursued is shown starkly by an opening sequence in which shots of Wiesler teaching a class of Stasi trainees are intercut with shots of one of his interrogation sessions. As he plays the recording of the interrogation to his students, he describes what he is trying to achieve: ‘The best way to establish guilt or innocence is non-stop interrogation. An innocent man becomes more angry; a guilty man becomes quiet and calm, or he cries. A liar has prepared statements; a man telling the truth can reformulate the truth.’

Donnersmark intensively researched the Stasi for four years before filming (which lasted just 37 days), including interviewing former employees and those who had been detained, in order to ensure the accuracy of the situation he portrayed. He was insistent on using original locations for such a film: notably the Stasi headquarters in Normannenstrasse and the Central Detention Centre in Hohenschönhausen.

Ulrich Mühe and Martina Gedeck in The Lives of Others (Das Leben der Anderen)
Image © Lionsgate, 2007

Wiesler is emblematic of one aspect of the State: he is unemotional, cold, efficient, soul-less. Grubitz reveals another, more pragmatic, side: his allegiance to the Party is nothing more than a means to the end of furthering his own prospects in the Party machinery. Hempf shows yet another side: having attained a position of power, he can exploit the system to gratify his base desires. Dreyman and his dissident friends provide a window into the opposing forces within the society. They are artists, free thinkers, many of whose lives are made miserable by the all-controlling State. One in particular, stage director Albert Jerska (Volkmar Kleinert), has long been Dreyman’s closest friend, but they are no longer able to collaborate because Jerska has been blacklisted. It drives him to the very limits of despair.

However, as Wiesler spends day after day listening to the goings-on in Dreyman’s apartment, he becomes increasingly unsettled. When he discovers that the operation is really all about dealing with a rival of a Central Committee member, he is displeased at the abuse of the system, but he must tread carefully to derail it. When Hempf, who has by this point forced Christa-Maria into an affair, drops her outside their apartment building, Wiesler sets off Dreyman’s doorbell to make him look outside and see her climb out of the car. But he is surprised that Dreyman doesn’t confront her.

As the days pass, he becomes increasingly aware of a different dynamic than he has ever encountered in a relationship: Georg and Christa-Maria love each other to the extent that Georg can forgive Christa’s infidelity, knowing that she has no choice but to cooperate with Hempf. As Wiesler begins to feel a connection with the couple, he begins to feel his own loneliness acutely, turning to a prostitute for comfort but longing for more than just sex. 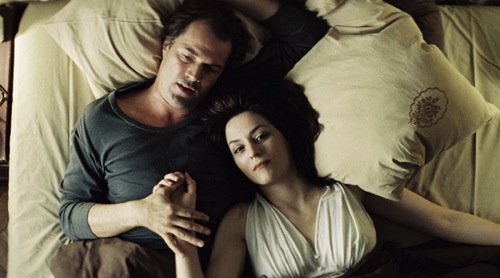 Sebastian Koch and Martina Gedeck in The Lives of Others (Das Leben der Anderen)
Image © Lionsgate, 2007

This connection that Wiesler feels affects his actions more and more. When Christa is about to leave the apartment on the pretext of meeting old school friends, Georg pleads with her not to go, revealing that he knows that she is meeting Hempf. But when she visits a nearby bar to fortify herself, Wiesler is there. She has no idea who he is, but he tells her that he is a great fan of her performances and that she should remain true to herself. The love which he witnesses in their relationship – and the quality of their wider friendships – has begun to soften Wiesler, gradually thawing his frozen heart and enabling him to act for the good of other individuals rather than fro the faceless Party. Christa is encouraged to return home rather than meeting with Hempf – an action which infuriates the Minister and ultimately leads to tragedy.

It is not just the power of love which Wiesler is challenged by, but art. As he listens to the passionate conversations among Dreyman’s circle, he realises that their lives revolve around something which is alien to him. He enters the apartment one day to look around, to be able to identify the things which inspire Dreyman. He gently touches their bed, pauses to look at the picture of Christa on Georg’s desk, then finding a book of Brecht, he takes it and begins to read it. For his fortieth birthday, Jerska gives Georg a musical score: Sonata for a Good Man (written especially for the film by the Oscar-winning composer Gabriel Yared). After Jerska’s death, Georg plays the sonata. Up in the attic, Wiesler is moved to tears – his first display of real emotion. So thoroughly swept away is Wiesler that this exemplary Stasi officer starts fabricating his reports in order to protect those who have unknowingly brought him to life. 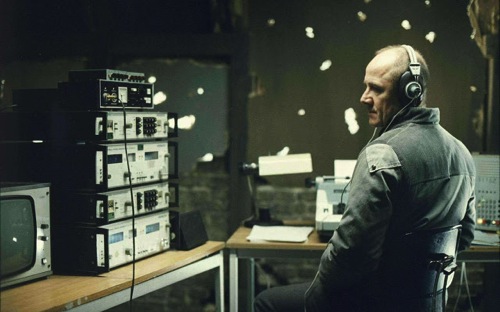 Ulrich Mühe in The Lives of Others (Das Leben der Anderen)
Image © Lionsgate, 2007

Early in the film, after the premiere of Dreyman’s new play, Minister Hempf says to him, ‘That’s what we all love about your plays: your love for humanity and your belief that people can change.’ ‘People cannot change,’ replies the playwright. But he is wrong, because he has no idea quite how transforming a love for humanity can really be.’ In the scene after Wiesler listens to Dreyman playing the Sonata for a Good Man, he eavesdrops on a conversation between Georg and one of his friends about music: ‘Do you know what Lenin said about Beethoven’s Appassionata? “If I keep on listening to this I won’t be able to finish the revolution.” Can anyone who heard this music – who really heard it – be a bad man?’ Wiesler, of course, has really heard music for the first time – he’s heard the emotion that it encapsulates rather than a string of notes. This line reinforces for us the transformation that is taking place in Wiesler’s character.

Wiesler is, in a sense, being born again in that fundamental dimensions of life with which he has had no prior meaningful connection are opening up to him. And it isn’t simply a question of a new appreciation of the meaning of love or of art, but of a new morality which is both more fundamental and more true than anything he has known. Gerd Wiesler has become a good man. There is not the slightest hint of any explicit connection with spirituality in The Lives of Others – this is Communist East Germany, after all. But Wiesler’s experiences are deeply spiritual because he is becoming more fully human, and the authentic human experience every bit as spiritual as it is physical. As so often when reflecting on human experience, it takes us back to the creation of humanity in God’s image.

In the creation accounts in Genesis 1–2, a number of dimensions of image-bearing humanity are hinted at or stated explicitly. Three dimensions resonate strongly with Wiesler’s awakening: the aesthetic, the relational and the moral. Here is a man who is becoming more like God intended him to be. But there is more to be discovered: the most fundamental of all dimensions is the spiritual; we were created to know God. Neither Wiesler nor Dreyman seem to be aware of this, but they are eventually both aware that the experience of true beauty points tenderly to something beyond the humdrum experience of human life. It’s an indicator of transcendence; a hint that the deep inner peace we crave is not a chimera but is there to be found. The discovery of this true peace, which is inextricably bound up with this fact that we were created to know God, is a more profound transformation than even that which Gerd Wiesler experiences. Which then raises the question: are we listening as committedly as Wiesler in our search for the truth?