In Woody Allen's film Vicky Cristina Barcelona, Juan Antonia (Javier Bardem) invites Vicky (Rebecca Hall) and Cristina (Scarlett Johansson) to accompany him to Oviedo to view a particular sculpture which he finds inspiring. Cristina jumps at the opportunity, but Vicky goes reluctantly. The statue we later see is of a crucifix, which allows Woody Allen to give his characters one of his typical conversations about meaning. Juan Antonio, speaking for Allen, says that he is not at all religious and thinks that life has no ultimate meaning.

But I've only just found out that Juan Antonio's reference to an inspiring sculpture in Oviedo is also a joke: the town erected a statue of Woody Allen in 2002 after he won the Prince of Asturias Award.

Posted via web from Tony Watkins 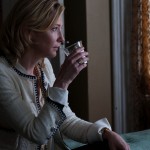 Twenty Questions to Consider When Watching a Film
© Tony Watkins, 2020
The Tony and Jane Watkins Trust oversees and supports the ministries of Tony and Jane Watkins in Christian training, education, and communication. It is a charity registered in England and Wales, no. 1062254.
Privacy policy