Matrix Revelations: A Thinking Fan's Guide to the Matrix Trilogy 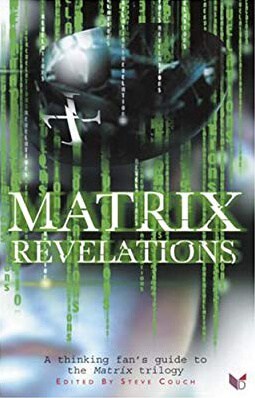 What is The Matrix? Groundbreaking, innovative and much imitated, The Matrix trilogy represents the most talked about cinematic experience in recent years. Unrivalled in uniting serious philosophical thought with serious box office, The Matrix, The Matrix Reloaded and The Matrix Revolutions occupy a unique place in popular culture.

Matrix Revelations: A Thinking Fan's Guide to the Matrix Trilogy examines the Matrix phenomenon, with in-depth analysis ranging from the science fiction and comic book influences to the philosophical and religious themes that underpin the films. If you love The Matrix and don't just fast-forward from one action scene to the next, then open up the pages of this book and see just how deep the rabbit hole goes. This was the first book to be published covering the whole trilogy - our publication date of 11 December 2003 was just 36 days after The Matrix Revolutions was released in cinemas across the world!

The writers/directors Andy and Larry Wachowski used a powerful story to raise very big questions from beginning to end of the Matrix trilogy (despite the failure of some film critics to realise this). This book enables you to identify and consider those questions.

Part One: The Films

1. The Architects (Caroline Puntis and Peter S Williams)
2. Down the Rabbit Hole: The Matrix (Steve Couch)
3. Everything You Know is Wrong: The Matrix Reloaded (Clive Thorne)
4. It Ends Tonight: The Matrix Revolutions (Steve Couch) (read this chapter on CultureWatch)
5. Everything That You Don't Have To Do: The cultural impact of the Matrix trilogy (Steve Tilley)

6. The Architects' Foundations (Peter S Williams)
7. This is the Construct: Postmodernism and The Matrix (Tony Watkins)
8. The Second Renaissance: Men, machines and a posthuman future (Clive Thorne)
9. Chosen or Caused? Morpheus versus the machines (Peter S Williams)
10. Do You See What I See? Religion in the Matrix trilogy (Anna Robbins)
11. The Matrix Redeemed: Love and redemption in the Matrix trilogy (Tom Price)
12. Red Pill, Blue Pill: conclusion (Tony Watkins)

Here is a book that intelligently and thoughtfully analyses the worldview of the Matrix trilogy.

This stimulating and challenging book enables us to identify and evaluate the multi-textured references through all three Matrix films.

Anthony Thacker, author of A Closer Look at Science Fiction

A multi-faceted, rich, illuminating and serious exploration of the Matrix film trilogy, and the major ideas behind it. This book not only engages with the material in a helpful, Biblical and robust way but also avoids the temptation of reducing the films simply to sources of evangelistic illustrations.