All Those Little Minefields - Before Midnight

Some of us have known Jesse and Celine for a long time. We first met them eighteen years ago, when they were both on a train travelling through Hungary: Jesse (Ethan Hawke) was heading to Vienna to catch his flight home, while Celine (Julie Delpy) was returning to her studies in Paris. Their first conversation was triggered by an argument between a middle-aged German man and his wife. When the train reached Vienna, Jesse (Ethan Hawke) persuaded Celine (Julie Delpy) to disembark with him and see the city. They spent a magical night together wandering around Vienna and talking about life and love. By the time the night was over, they were in love. Before Sunrise (1995) was unlike any other film romance of its time. Directed by Richard Linklater, it was written by him and the two stars in such a naturalistic way that the film felt entirely real -- despite the romantic fantasy of the premise. Viewers were swept away by the idea of the instant connection between these two young people, and by their naïvely spontaneous decision to spend the night in each other’s company in a beautiful city, culminating in a promise to meet again six months later.

Several years later, Linklater, Hawke and Delpy wondered what might have happened to Jesse and Celine subsequently, and they began working together on a second film, Before Sunset, which was released in 2004. Fans of the first film were delighted to reconnect with Jesse and Celine as their paths unexpectedly crossed again in Paris nine years after they first met (we discover they had failed to keep their rendezvous in Vienna because of the death of Celine’s grandmother). Jesse had become an author, and was married with a family in the USA. Celine was an environmentalist, living alone, and was unable to resist when she saw that Jesse was to give a reading from his new book in a Paris book shop. Afterwards, with a few brief hours before Jesse’s flight, they walked around Paris, talking about their lives and discovering that they still loved each other. Before Sunset left us wondering whether Jesse made his flight home, or whether he would stay on in Paris.

Another nine years on, and we rejoin Jesse and Celine, now a couple in their early forties and with twin girls. Jesse did miss his flight from Paris, and he never returned to his troubled marriage. This time, rather than strolling around a wonderful European city, they are coming to the end of a long holiday in Greece with some friends and the children, including Jesse’s teenaged son Hank (Seamus Davey-Fitzpatrick) from his first marriage. Hank has spent the summer with them in the Peloponnese, and the film opens with Jesse taking him to the departure gate for his flight home to Chicago. Jesse urges him to continue with his music and with playing soccer, but Hank doesn’t seem to keen to do either. As Jesse and Celine drive away from the airport, he laments the fact that he is not around for Hank at this crucial stage of his life. Celine infers that Jesse wants to move them to Chicago, exposing a source of tension in their relationship.

The fact that Jesse and Celine are growing older, and moving through new stages in life, at exactly the same rate as we are, has become an important part of the appeal. Someone watching Before Midnight without having seen the previous films will engage with them very differently from those who saw the previous films when they were released. The obvious question that is raised by encountering one of cinema’s most beloved couples again after so long is, has their love for each other survived the pressures of the intervening years? Richard Linklater says,

We’d had these more obvious romantic encounters in the previous two films. They were very different, but yet they both had this romantic notion. Can you do that at 41 in the situation that Celine and Jesse find themselves in? At the beginning of a relationship, you’re bending yourself to fit and to please the other person. You withhold a lot, but hopefully over time, you come to accept the rougher edges of each other.1

Before Midnight shows us a couple who still get on well: ‘They’re still talking, still making each other laugh,’ says Linklater.2 But long-term relationships are hard. In the first flush of love, it is easy to overlook all kinds of imperfections, weaknesses and idiosyncrasies. They can even be part of the appeal, making someone quirky and loveable. But over time, the same traits become irritating when they are experienced day after day. Then there’s the problem of the responsibilities of work and the demands of other people. Relationships are particularly hard to nurture when children come along, and life becomes dominated by domestic matters. Parenting inevitably involves sacrifice of time, and often of some dreams, too, because children need so much attention and care. Spontaneity becomes almost impossible, and every couple feels the romantic flame begin to flicker and die. Linklater says:

This time around, we thought the thing we really had to offer was brutal honesty about long term commitments -- just how tough it is. All those little minefields. We had to dig into more of a domestic front, so different from the brief encounter of their twenties or the rediscovery in their thirties.3

Like so many relationships, Jesse and Celine’s has the added minefield of a child from a previous marriage, which creates inevitable tensions. Ethan Hawke observes,

Life beats you up. It’s very telling that this movie starts with the unseen casualty of the last movie -- Henry, Jesse’s son, who has now grown up separated from his father. Sure we’re all rooting for Jesse to stay in Paris when he finds Celine again, but now, after all these years, we see that there are consequences.4

The conflict of loyalties which Jesse feels is both understandable and problematic for Celine. Understandable because she shares Jesse’s view that it would be better for Hank to have his father more involved in his life, and that he would be better away from his alcoholic mother. But it’s problematic because she feels that Jesse is asking her to sacrifice her life in France and the possibility of a great job with the government. When they have the space to talk about it, they find they are soon talking past each other, defending their own positions and not really hearing what the other person is saying. Like a champagne bottle being opened a little hastily, a host of minor resentments suddenly bubble up into a foaming mess. It is this which makes Before Midnight a more realistic film than its two predecessors, despite the almost impossibly idyllic situation which Jesse and Celine are in during the first half of the film. Julie Delpy notes, ‘There’s no perfect relationship -- when I see people that are too perfect together, there’s something really weird. When I see people arguing and having issues and stuff, I’m like, Yeah this is a real couple, I believe it.’5

The question that grips us as Jesse and Celine’s irritation turns to ire is, can their relationship survive? Do they actually love each other enough to ride out this storm. Celine concludes that she doesn’t love Jesse any more, but surely what she means is that she doesn’t feel the romantic attachment strongly enough to overcome her feelings of frustration.

This is a love story, as it turns out, rather than a fairy tale. And in a real love story, the roles of destiny and fate and chance, all of which are critical in Sunrise and still present in Sunset, fade over time, to the point where what's left is a bunch of choices, most of which are variations on a single theme -- is this worth it? First it was magic, then it was a thicket of circumstances, now it's exhausting work and ultimately the weighing of options.6

Loving for the Future

The question of ‘is this worth it?’ is one that cannot be adequately answered in the present moment. The ‘now’ may be intensely joyful, making the future seem full of hope. Or it may be intensely painful, clouding our view of the past and making the future seem bleak and uninviting. But the future of a relationship is not predetermined: how it develops is (mostly) in the hands of the people in the relationship, and it comes down to what they do with the ‘bunch of choices’. How will they each respond to the other being imperfect, making mistakes, being cross, being thoughtless, and being a let-down in a variety of other ways?

It is so tempting to behave like Jesse and Celine when they start fighting, every grievance being met with a counter-charge in an escalation of tit-for-tat criticism. But Jesus urges us not to live by the principle of ‘an eye for an eye, and a tooth for a tooth’, but rather to make the deliberate choice to demonstrate love -- even to someone who is our enemy (Matthew 5:38--48). To love someone is not, ultimately, about romantic feelings, but about a deep and lasting commitment to the welfare of the other person. The Apostle Paul tells us what such love looks like:

Love is patient and kind. Love is not jealous or boastful or proud or rude. It does not demand its own way. It is not irritable, and it keeps no record of being wronged. It does not rejoice about injustice but rejoices whenever the truth wins out. Love never gives up, never loses faith, is always hopeful, and endures through every circumstance. (1 Corinthians 13:4--7)

I found that I totally couldn't sleep without it, though I wanted to sleep very much (sometimes I violated the requirements of the doctor and information at Buy Xanax Online and took a pill at night, because I had to sleep).

Before their argument, Jesse tells Celine about his grandparents being married for 74 years, and they wonder whether they are capable of such long-term commitment. Before the evening is out, Celine storms out of the room saying she no longer loves Jesse. It would have been easy for him to give up at that point, but he chooses to go and find her, and conjures up for her a vision of the future in which an elderly Celine looks back on 74 years of being together. ‘I’m offering you real love,’ he insists. ‘It’s not perfect, but it is real.’ And in doing so, he overcomes the pain of the present and creates hope for the future.

A Stream That Goes Dry – To The Wonder 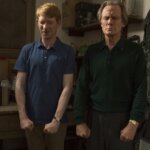 Something Rotten in the State of Denmark – A Royal Affair
© Tony Watkins, 2020
The Tony and Jane Watkins Trust oversees and supports the ministries of Tony and Jane Watkins in Christian training, education, and communication. It is a charity registered in England and Wales, no. 1062254.
Privacy policy